The Sentinel-1 SAR imagery, in the Interferometric Wide (IW) mode, C-band, with dual polarization VV (Vertical transmit Vertical receive), VH (Vertical transmit Horizontal receive), was acquired on 1 March 2017 from Kuh Sefid district, which is a village located in the Central District of Qom County, Qom, Iran. This area, which has a hot and dry climate with annual precipitation of about 115.5 mm, the highest temperature of 39.7 °C in July and the lowest temperature of 0.4 °C in December, is affected by severe salinity hazard mainly due to the vicinity to the Salt Lake Qom. The surface soil texture in this region varies between silt loams to silty clay loam, which has a yellowish brown to dark brown color.

Two pairs of single-look quad-polarimetric SAR images acquired by the UAVSAR airborne sensor in L-band over an urban area in San Francisco city on 18 September 2009, and May 11, 2015, are used for the experiments. The dataset #1 have length and width of 200 pixels and the dataset #2 length and width of 100 pixels.

Here you can find information over some public available hyperspectral scenes. All of them are Earth Observation images taken from airborne or satellites.

This scene was gathered by AVIRIS sensor over the Indian Pines test site in North-western Indiana and consists of 145´145 pixels and 224 spectral reflectance bands in the wavelength range 0.4–2.5 10-6 meters. This scene is a subset of a larger one. The Indian Pines scene contains two-thirds agriculture, and one-third forest or other natural perennial vegetation. There are two major dual lane highways, a rail line, as well as some low density housing, other built structures, and smaller roads. Since the scene is taken in June some of the crops present, corn, soybeans, are in early stages of growth with less than 5% coverage. The ground truth available is designated into sixteen classes and is not all mutually exclusive. We have also reduced the number of bands to 200 by removing bands covering the region of water absorption: [104-108], [150-163], 220. Indian Pines data are available through Pursue's univeristy MultiSpec site.

This scene was collected by the 224-band AVIRIS sensor over Salinas Valley, California, and is characterized by high spatial resolution (3.7-meter pixels). The area covered comprises 512´217. As with Indian Pines scene, we discarded the 20 water absorption bands, in this case bands: [108-112], [154-167], 224. This image was available only as at-sensor radiance data. It includes vegetables, bare soils, and vineyard fields. Salinas ground truth contains 16 classes.

These are two scenes acquired by the ROSIS sensor during a flight campaign over Pavia, nothern Italy. The number of spectral bands is 102 for Pavia Centre and 103 for Pavia University. Pavia Centre is a 1096´1096 pixels image, and Pavia University is 610´610 pixels, but some of the samples in both images contain no information and have to be discarded before the analysis. The geometric resolution is 1.3 meters. Both image ground truths differentiate 9 classes each. It can be seen the discarded samples in the figures as abroad black strips. Pavia scenes were provided by Prof. Paolo Gamba from the Telecommunications and Remote Sensing Laboratory, Pavia university (Italy).

The NASA AVIRIS (Airborne Visible/Infrared Imaging Spectrometer) instrument acquired data over the Kennedy Space Center (KSC), Florida, on March 23, 1996. AVIRIS acquires data in 224 bands of 10 nm width with center wavelengths from 400 - 2500 nm. The KSC data, acquired from an altitude of approximately 20 km, have a spatial resolution of 18 m. After removing water absorption and low SNR bands, 176 bands were used for the analysis. Training data were selected using land cover maps derived from color infrared photography provided by the Kennedy Space Center and Landsat Thematic Mapper (TM) imagery. The vegetation classification scheme was developed by KSC personnel in an effort to define functional types that are discernable at the spatial resolution of Landsat and these AVIRIS data. Discrimination of land cover for this environment is difficult due to the similarity of spectral signatures for certain vegetation types. For classification purposes, 13 classes representing the various land cover types that occur in this environment were defined for the site. 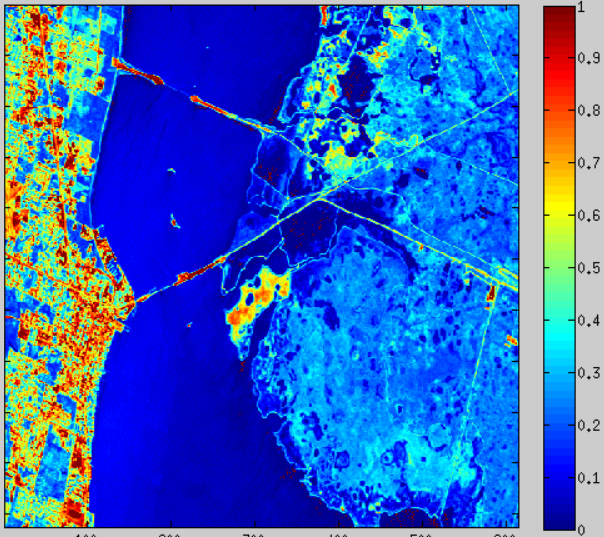 The NASA EO-1 satellite acquired a sequence of data over the Okavango Delta, Botswana in 2001-2004. The Hyperion sensor on EO-1 acquires data at 30 m pixel resolution over a 7.7 km strip in 242 bands covering the 400-2500 nm portion of the spectrum in 10 nm windows. Preprocessing of the data was performed by the UT Center for Space Research to mitigate the effects of bad detectors, inter-detector mis-calibration, and intermittent anomalies. Un-calibrated and noisy bands that cover water absorption features were removed, and the remaining 145 bands were included as candidate features: [10-55, 82-97, 102-119, 134-164, 187-220]. The data analyzed in this study, acquired May 31, 2001, consist of observations from 14 identified classes representing the land cover types in seasonal swamps, occasional swamps, and drier woodlands located in the distal portion of the Delta.

Samson is a simple dataset that is available from the website. In this image, there are 952x952 pixels. Each pixel is recorded at 156 channels covering the wavelengths from 401 nm to 889 nm. The spectral resolution is highly up to 3.13 nm. As the original image is too large, which is very expensive in terms of computational cost, a region of 95x95 pixels is used. It starts from the (252,332)-th pixel in the original image. This data is not degraded by the blank channel or badly noised channels. Specifically, there are three targets in this image, i.e. "#1 Soil", "#2 Tree" and "#3 Water" respectively.

Samson and its ground truths

Jasper Ridge and its ground truth

Urban is one of the most widely used hyperspectral data used in the hyperspectral unmixing study. There are 307x307 pixels, each of which corresponds to a 2x2 m2 area. In this image, there are 210 wavelengths ranging from 400 nm to 2500 nm, resulting in a spectral resolution of 10 nm. After the channels 1-4, 76, 87, 101-111, 136-153 and 198-210 are removed (due to dense water vapor and atmospheric effects), we remain 162 channels (this is a common preprocess for hyperspectral unmixing analyses). There are three versions of ground truth, which contain 4, 5 and 6 endmembers respectively, which are introduced in the ground truth.

Urban and its ground truths

The China dataset belongs to a farmland near the city of Yuncheng Jiangsu province in China, which was acquired on May 3, 2006, and April 23, 2007, respectively. This scene is mainly a combination of soil, river, tree, building, road and agricultural field. For this dataset, all changes related to the type of land cover and river. In addition, this dataset belongs to Hyperion sensors.

The USA dataset belongs to an irrigated agricultural field of Hermiston city in Umatilla County, Oregon, OR, the USA, which was acquired on May 1, 2004, and May 8, 2007, respectively. The land cover types are soil, irrigated fields, river, building, type of cultivated land and grassland. For this dataset, all changes related to the type of land cover and river. In addition, this dataset belongs to Hyperion sensors.

The figure here shows a simulated color IR view of an airborne hyperspectral data flight line over the Washington DC Mall provided with the permission of Spectral Information Technology Application Center of Virginia who was responsible for its collection. The sensor system used in this case measured pixel response in 210 bands in the 0.4 to 2.4 µm region of the visible and infrared spectrum. Bands in the 0.9 and 1.4 µm region where the atmosphere is opaque have been omitted from the data set, leaving 191 bands. The data set contains 1208 scan lines with 307 pixels in each scan line. It totals approximately 150 Megabytes. The image at left was made using bands 60, 27, and 17 for the red, green, and blue colors respectively.

Recently, Khoshboresh-Masouleh and Hasanlou (2020) introduced a revised replacement signal model for improving hyperspectral sub-pixel target detection in multiple target signatures. In this paper, the hyperspectral image with coverage areas of approximately 2.0 km2 in Cooke City town, MT, USA is used as the experimental data. It was provided via the HyMap airborne hyperspectral imaging sensor by Snyder et al., (2008). HyMap sensor flown at 1.4 km above the ground level. The Cooke City dataset is illustrated in Fig. 1a, where there are 280×800 pixels. Each pixel is observed at 126 bands covering the electromagnetic spectra from 0.45 to 2.48 μm and the ground sample distance is 3.0 m. In this study, the three vehicles (Fig. 1b- d) and four fabric panels (Fig. 1e-h) in different sizes and colors were selected as targets. The reference spectra of the vehicles and the fabric panels were measured by an Analytical Spectral Devices, Inc. FieldSpec Pro, and a Cary 500 spectrophotometer, respectively. The vehicles were occupied at most a few pixels, but fabric panels F1 and F2 were nearly a full pixel while fabric panels F3 and F4 were occupied less than a pixel. The public open-source dataset used to support this study is available at http://dirsapps.cis.rit.edu/blindtest/.